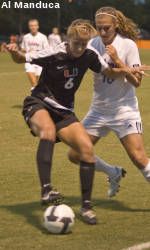 No. 22 Miami Falls to Navy in Hurricane Cup Finale

CORAL GABLES – The 22nd-ranked University of Miami women’s soccer team (3-2-0) fell to the Navy Midshipman (5-0-1), 1-0, in the final game of the inaugural Hurricane Cup at Cobb Stadium on Sunday afternoon.

The `Canes dominated time of possession and the scoring opportunities for the entire game, as the tournament hosts held a 25-3 advantage in shots for the contest, 11 of which were on goal.

However, only 2:28 into the contest, Navy’s Carissa Youker took a pass from Anastasia Abid and headed it over Miami’s Vikki Alonzo for the early score. Navy’s Katelyn George was also credited with an assist on the play.

The Hurricanes played at a frenzied pace in the games final minutes, trying for an opportunity to tie the game up and send the match into overtime. But it was to no avail as Navy did just enough to keep the ball lout of their goal.

“I was actually very pleased with the team to create as many chances as possible,” said head coach Tricia Taliaferro. “I think we had a lot of players that came off the bench to provide some depth to be able to create (those chances), but you’ve got to be able to finish the game.”

Five different Miami players had two shots on goal in the contest and junior Brittney Steinbruch hit the post with one of her team-high six shots. The Hurricanes have given up only three goals on the season. Unfortunately, two of the three have come in shutout losses.

Miami wrapped-up their season-opening five game homestand and had their three-match win streak snapped in the loss.

The Hurricane Cup came to an end with the naming of the All-Tournament Team. The Miami student-athletes that were honored were senior captain Beverly Goebel and juniors Brittney Macdonald and Steinbruch.

Miami will travel to the Pacific Northwest to participate in the Nike Portland Invitational in Portland, Ore. Sept. 11-13. On Friday, Sept. 11th the `Canes will face the Washington Huskies at 7:30 p.m. EST. Two days later, Miami will square off against the nation’s No. 1 ranked Portland Pilots at 5 p.m. EST.