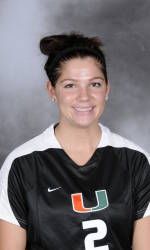 The first goal of the Hurricanes’ season came from junior transfer Barbara Blocker in the opening half. In the second period, junior Brittney Steinbruch and senior Beverly Goebel secured the victory with a goal each.

“We saw some things on film that we needed to improve on from the Florida game and we addressed it,” said head coach Tricia Taliaferro. “The team was motivated because they were not happy with the result from Friday’s game. We just focused on the details and part of that was the set pieces.”

In the 35th minute, Miami earned a corner kick that was taken by Lauren Singer. She sent the ball to the far post, where Blocker leapt into the air and headed the ball into the back of the net. The University of Oregon product scored in only her second game as a Hurricane.

“When the ball is in the air, you just have to think that’s it’s your ball,” said Blocker. “That’s what I thought. It’s my ball and I’m going to get it.”

For the most part the first half was played with both teams struggling to break through their opponent’s defense with the Blocker goal being the exception. However, the `Canes did hold a 6-3 advantage in shots in the first period.

The second half was a much different story as Miami dominated tempo, attacking from all over the field.

In the 63rd minute Paulelette Ricks-Chambers drew a foul just outside the penalty area. On the free kick, Jessica Wyble chipped the ball in front of the net where Steinbruch flicked it in off her head.

“We have worked on set pieces a lot. It’s an important part of the game,” said Steinbruch. “The coaches always tell us that set pieces account for a third of all our goals. It was really nice to score some goals and get the win.”

The goal was the first of the season for Steinbruch, but it was the 25th of her career, leaving her just four shy of tying the school’s record of 29 set by Britney Butcher (2001-04).

Only eight minutes later, sophomore Ashlee Burt advanced the ball up the left side of the field through the Gulf Coast defense. She played the ball on to Goebel who lobbed the ball over the charging keeper from 25-yards out to end the scoring at 3-0.

Vikki Alonzo needed to make only one second-half save and combined with freshman Ali Brennan for the shut out.

For the match, the Hurricanes had a total of 13 shots, to only eight for the visitors. Also, Miami was given six corner kicks on the night, while Eagles were held without one.

Miami will again be in action at Cobb Stadium this Friday, Aug. 28 as it will play host to the Ball State Cardinals at 7:30 p.m. Tickets will be on sale at the Cobb Stadium gate at $5 for adults and $3 for children.