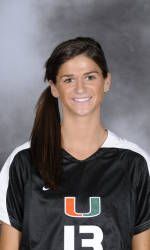 CORAL GABLES – The University of Miami women’s soccer team (0-1-0) fell to No. 8 Florida (1-0-0) Friday evening at Cobb Stadium, 1-0 in both teams season-opener. The only difference in the contest was an early second-half goal from the visiting Gators, in front of a Miami record-shattering crowd of 2,277 spectators.

Florida’s Ashlee Elliott tallied the game’s only goal as she headed Tricia Townsend’s long entry pass over the outstretched hands of the charging Vikki Alonzo in only the third minute of the second half.

Miami had their opportunities throughout however, especially in the games first several minutes and again late in the contest. In all, the `Canes held a 15-13 advantage in shots, as each team put six on goal.

Alonzo made five saves on the evening, all of which were crucial in keeping the `Canes in the match.

In her first game being completely healthy in over nine months, Brittney Steinbruch recorded a total of four shots, with three coming painstakingly close to hitting the back of the net.

“We have never had a crowd like we had tonight, it was awesome to play in that atmosphere,” said Steinbruch. “I wish some of those shots went in, but I’m going to watch the tape and I’m going to learn from those.”

In the 63rd minute, Steinbruch jumped on a missed clearance by the Gators and found herself one-on-one with the Florida keeper, unfortunately her shot sailed just right of the post and the `Canes remained scoreless.

“I’m very proud of this team, obviously we are disappointed in the missed opportunities,” said head coach Tricia Taliaferro. “But overall, our ability to play forward and defend well was good to see. You just need to capitalize on opportunities when you are playing one of the top teams in the country.”

Junior Lauren Singer fired two shots on goal late in the match and had four shots total in the game. She was joined by seniors Paulellete Ricks-Chambers and Jessica Wyble as `Canes that also recorded more than one shot.

The Gators opened the game with a scoring chance in the third minute when Ashlee Elliott had a seemingly open goal, but Miami sophomore Vikki Alonzo jumped out to deflect the ball out of play.

On consecutive possessions, the Hurricanes had opportunities to score but shots by Ricks-Chambers and Steinbruch rolled just wide in the seventh and ninth minutes of the game respectively.

The rest of the first half was played with each team struggling to maintain possession. The best opportunity for either team came in the 43rd minute when UF’s Brooke Thigpen headed a long cross that Alonzo kick-saved to keep the match scoreless heading into the break.

At the half both teams had recorded seven shots, with the visitors holding a 3-1 advantage in shots on goal.

The Hurricanes will now prepare for their next game, which is Tuesday, Aug. 25 against Florida Gulf Coast. Gametime is set for 7:30 p.m. at Cobb Stadium with tickets on sale by calling 1-800-GO-CANES at $3 for children and $5 for adults.