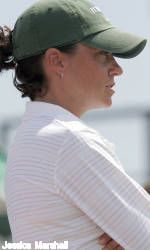 CORAL GABLES – The University of Miami women’s soccer team opens the 2009 season at home against the No. 8 Florida Gators, Friday, Aug. 21 at 7:30 p.m. at Cobb Stadium.

The meeting will be the first for the two teams since Florida eliminated the Hurricanes in the first round of the 2007 NCAA Tournament in Gainesville, Fla.

Miami is coming off its second consecutive NCAA Tournament berth and third overall in the program’s short 11-year history. The Gators advanced to the third round of the tournament and were crowned the SEC champions in 2008.

Head coach Tricia Taliaferro heads into her eighth season at the helm of the `Canes and will face her toughest schedule in 2009 with a total of eight teams in preseason polls.

With eight returning starters, the Hurricanes keep all of their scoring from a season ago. In addition, junior Brittney Steinbruch is completely healthy. The Wyckoff, N.J. native has led UM in scoring the past two seasons and a year ago she had a team-leading eight goals despite missing nine games.

Last week, in their pre-season scrimmage against Florida Southern, senior Paulellete Ricks-Chambers scored two goals and freshman Kate Howarth scored a goal and had an assist in the 5-0 victory. Combining for the shutout was returning Soccer Buzz Third-Team Freshman All-American Vikki Alonzo and the very talented incoming freshman Ali Brennan.

The 2009 `Canes feature a total of 12 newcomers that have added depth and competition at each position on the field.

Tickets are available by calling 1-800-GO-CANES or by visiting hurricanesports.com, and are $5 for adults and $3 for children.

Fans not able to attend may still follow the action by clicking on the GameTracker link on hurricanesports.com