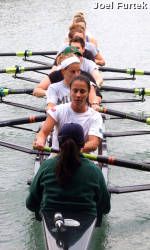 Coral Gables, Fla. – The University of Miami rowing team heads back to Lake Melton for the second time this year over the weekend on May 16-17, taking part in the annual South/Central Regional Championships in Oak Ridge, Tenn. Saturday’s event will feature preliminary heats and continues through Sunday’s finals.

For the second year in a row, the University of Tennessee will serve as host of the annual event.

Miami crews have gotten faster throughout the year, according to interim head coach Boban Rankovic. And with the Hurricanes finding success at the Windermere Cup in Seattle two weeks ago, the team is eagerly awaiting their chance to get back out on the water.

With four teams advancing to the “C” Finals of last year’s Aramark Sprints, and the Varsity Eight ultimately claiming a title in the “C” Finals of the South/Central Regionals, the experience from that crew will look to capitalize on last year’s success. Last year, it was Miami’s Varsity Eight crew of coxswain Shira Kharrazi, stroke Louise Parry, Laura Cordner, Nicola Saner, Bethany Krawec, Kelly Amsler, Emily Wingrove, Monika Sajincic and bow Karalyn Van Aken who came away with a thrilling win over Indiana, beating out the second-place Hoosiers, 6:51.200-to-6:52.700 to claim the final.

“We hope to improve off of our performance from last year, which requires everyone on the team having their best races,” stated Rankovic, making his coaching debut at the South/Central Regional Championships.

UM comes into the weekend having earned five Top 3 finishes in their last two race events, including a win over the Brazilian National Team at the Windermere Cup. However, the Hurricanes are switching some things up this weekend as the lineups will be a bit different at the bow for both Varsity Eight and JV8.

“We are racing this weekend without a full squad, and that will hurt us,” expressed Rankovic. “However, we do have the possibility of surprising ourselves and triumphing through adversity. When we lost our head coach [Robbie Tenenbaum] in March, we went to ACCs and tied our team’s highest finish ever at the championship. We are a squad that loves to race.”

“We expect to see our toughest competition of the season this weekend,” continued Rankovic. “Many of the teams that we are racing against are ranked nationally. We look forward to some tight racing. It’s all about progressing from one race to the next; heats to semis to finals; and taking it one stroke at a time.”

The 13th Annual South/Central Region Championship field will be one of the best and strongest in recent years. This year’s field includes seven Varsity Eight shells ranked in the top 20 including No. 6 Michigan, No. 8 Ohio State and No. 10 Clemson.

When the NCAA decided to add rowing to its docket of sponsored collegiate sports and institute a national championship event, the governing body also divided up the schools that fielded rowing teams into five different regions: New England, Mid-Atlantic, Central, South and West.

With the establishment of the groupings, regional championships were also developed. In the Central Region, Oak Ridge’s Melton Hill Lake was chosen as the site of the inaugural competition in 1997 and has hosted ever since. It was selected by the coaches because of its geographically-centralized location and its recognition as one of the nation’s best courses.

“Miami is a growing program, both in depth and in strength,” commented Rankovic. “We will compete this weekend with some of the powerhouse programs in the country. We learn something every time we shove off the dock; every time we take a stroke; every time we race down the course. We will succeed this weekend if we can learn from this experience and take it forward with us next year.”