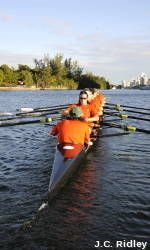 Coral Gables, Fla. – After more than a week away from the course, the University of Miami rowing team heads to the Pacific Northwest Saturday, May 2, as they take part in the 23rd Annual Windermer Cup/Opening Day Regatta in Seattle, Wash.

The Opening Day regatta has been a part of the opening day of boating season since 1970. In 1987, the race’s sponsorship by Windermere Real Estate, Inc. started the Windermere Cup Regatta. Since 1987, teams from China, Australia, Russia, South Africa, and the Czech Republic, among others, have come to race against the men’s and women’s rowing teams from the University of Washington on the Montlake Cut.

“We are excited to be racing here at Opening Day in Seattle,” said Boban Rankovic, interim head coach for the Hurricanes. “It is a unique experience, and we would like to thank our hosts–the University of Washington and Windermere for this opportunity. Our team is looking to gain speed this weekend as we race Brazil and the Huskies.”

“The First Varsity 8+ has had some great practices this past week in Miami and we’d love to build off our success at ACCs,” admits Rankovic, whose first interim responsibility was coaching the Hurricanes at the San Diego Crew Classic in early April. “The second Varsity 8+ has made technical improvements each practice that we expect to result in a stronger middle of the race. Getting out on the water to practice today was a great chance to see the course and prepare for the controlled chaos that we expect tomorrow to be. Today was sunny with clear skies and calm water, which made for nice row with the mountains in the background. We feel prepared to race in whatever mother nature presents tomorrow.”

The `Canes last took to the waters on Apr. 20, pulling in a third place performance at the Atlantic Coast Conference (ACC) Championships in Oak Ridge, Tenn.

The Hurricanes finished third in the Varsity Eight, completing a time of 7:00.01, coming in three seconds ahead of Boston College (7:03.60). Aiding the 1V8+ crew for UM was fellow All-ACC member sophomore Emily Wingrove. Wingrove collected her first All-ACC honor this season after being named to the All-Academic team a year ago.

The races are in conjunction with the Opening Day of Boating Season and are followed by the Opening Day Boat Parade. Nearly 500 rowers compete in this prestigious event, which culminates with the women’s and men’s Windermere Cup races.

Following the races, fans are invited to join the regatta champions for the awards ceremony and presentation of the Windermere Cup Trophy at the Conibear Shellhouse.

Admission to the event is free and can be seen by land or boat.