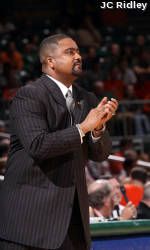 “Antoine is going to be a great asset for our ball club,” said Haith. “He is a tough, hard-nosed athlete that will add depth to this team. He has strong ball-handling skills and plays at both the one and two guard positions.”

Also eligible for Miami in 2009-10 will be sophomore transfer Malcolm Grant (Brooklyn, N.Y.), a 6-1 point guard who sat out this season per NCAA rules after appearing in 29 games for Villanova in 2007-08.