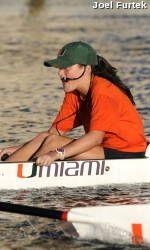 Miami is participating in the first meet since Mar. 12 when they defeated the University of Connecticut in Miami Beach, Fla. The Hurricanes and Boban Rankovic are eager to get back to the water for live racing, as well as a shot at some of the nation’s best programs.

“It’s been a very positive and strong growing experience at practice the past few weeks,” stated Rankovic. “Day in and day out, the coaches and I have noticed a difference in boat speed and it’s given us a confidence coming into San Diego. It makes us very competitive, and thirsty for success.”

UM is scheduled to race in three heats on Saturday. The `Canes begin their first race at noon [EST].

“The level of competition out here is tremendous,” expressed Rankovic, who was appointed interim head coach upon the resignation of Robbie Tenenbaum just over two weeks ago. “If we can accomplish what we have put ahead us, as far as our goals and mission out here, then it’ll be a great honor for the University of Miami Hurricanes Rowing program.”

UM is participating for the sixth time in the San Diego Crew Classic and has won three trophies during that span. The Hurricanes did not compete in the annual Crew Classic last year, but the JV 8 team won first place in the Women’s JV petite race in 2007.

Miami will be participating against a handful of teams in the three heats. The `Canes will join a host of top-level competitors on the west coast, including USC, UCLA, Ohio State, UC-Irvine, Sacramento State, Washington State, Kansas State, Wisconsin, Michigan, and Sonoma.

The Crew Classic and all races for the event will be streamed live at http://www.crewclassic.org/video/ over the two days. ESPNU will also broadcast the 2009 Crew Classic Highlights seven times, starting on May 7 at 7 p.m. [EST].