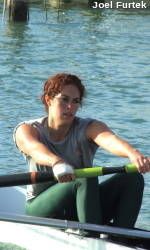 A day after defeating Dowling and Rochester, the Miami Hurricanes were eager to get back to the waterway as they played host to BIG EAST power Connecticut. Miami won all three varsity events, and lost just the one novice race.

“I was thrilled that we were able to sweep the Connecticut Huskies in the three varsity events today,” stated UM head coach Robbie Tenenbaum. “We talked a lot about improving our race tactics this week, and I know that we have made some pretty big improvements. It is fun to watch our team develop.”

Conditions on the day were great for both rowers and race fans. There was lots of sun at the start, with the race beginning at 8 a.m. Temperatures were around 75 degrees, and there was a cross head wind. The water was great, and even a few dolphins made their way around the boats to enjoy the action.

“Our First Varsity Eight has really come together in the last week,” commented Tenenbaum. “The practices have been tough and spirited–and the crew knows that we have a lot of work to do in the weeks ahead as we prepare for the San Diego Crew Classic. They are all looking forward to getting even more in sync in the next few weeks. This boat raced better today than we did yesterday, and I am proud of how much attention to detail these nine student-athletes is showing.”

In the Second Varsity Eight, the Hurricanes and Huskies were neck-and-neck for the first half of the race, only to see the `Canes score the win with a finishing time of 7:11.93. The UConn Huskies finished up at 7:24.09.

“The Second Varsity Eight had a great race today,” commented Tenenbaum. “Kate Rickers (stroke seat) gives this group an incredible rhythm to follow. This race started out close, but our kids really held their composure and powered their way through about 500 meters into the race. Then we just kept opening up more distance from UConn.”

In Varsity Four action, the Hurricanes were untouchable again as they finished with a winning time of 8:00.30, narrowly edging the Huskies’ who finished at 8:04.40. The race was simply exciting, and the finish was seemingly too close to call until the three-quarter mark of the contest.

“The Varsity Four race was close for the first 1,500 meters with Miami leading the entire way, but UConn was only a few seats back,” added Tenenbaum. “With 500 meters to go, the Miami boat brought the stroke rating up two beats and took about a length on the Huskies, and then managed to hang onto that lead the rest of the way to the finish line. I was most proud of how well this young group raced this morning. They kept their composure in a very close race, and showed the maturity of a more experienced crew.”

The Huskies took their one win on the day in novice action as UConn defeated the Hurricanes Novice boat with a winning time of 7:38.60. Miami crossed at a time of 8:28.72 in the contest. The Hurricanes used Stephanie Kane (bow), Nicole Miller (2), Kate Hall (3), Victoria Uribe (4), Julie Creamer (5), Morgan Visalli (6), Maria Siemann (7), Natalie Snyder (stroke) and Tiara Brown (coxswain).

For the novice crew of UM, this was their first action of the spring season.

The `Canes will have almost a month to prepare for their next regatta, taking part in the annual San Diego Crew Classic on Apr. 4-5 in California.