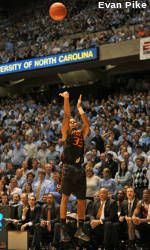 Wake Forest head basketball coach George Edward “Skip” Prosser passed away on July 26, 2007. Prosser compiled a 291-146 career record in 14 seasons as a head coach, including a 126-68 mark in his six years with the Demon Deacons. The 2003 ACC Coach of the Year, Prosser won 20 plus games and led Wake Forest to the NCAA Tournament in each of his first four seasons in Winston-Salem and brought the school its first outright ACC regular season title in 2003. Every Wake Forest senior he coached graduated and the Deacons placed nine players on the annual All-ACC Academic Basketball Team during his tenure.

In order to be nominated for the award, a student-athlete must be an upperclassman with a grade-point average of 3.0 or better – both in his career and in the previous two semesters. Sixty percent of the award is based on academic achievement

Named to the Naismith Midseason watch list, McClinton has 36 games with 20 or more points and ranks seventh among Miami career scoring leaders with 1,655 points.

“Jack McClinton is the quintessential student-athlete,” said Miami head coach Frank Haith. “He has an unparalleled work ethic that translates from the classroom to the basketball court, and he does not let anything detract from his determination and drive to succeed in all that he does. He has surpassed all of my expectations and has become one of the best players in ACC history – which is quite an achievement. Jack is the total package and has been a joy to coach.”