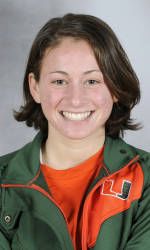 Coral Gables, Fla. – The University of Miami rowing team hosts three teams in two dual races this week, welcoming Dowling College, the University of Rochester and the University of Connecticut to the Indian Creak waterway on Wednesday and Thursday in Miami Beach, Fla. The action starts at 8 a.m. Wednesday, and then at 9 a.m. Thursday … with admission free both days.

Miami’s First Varsity Eight will race against Dowling and Rochester [an upstart club team] in a tri-match on Wednesday at 8 a.m. That will be followed by the two fours racing against Dowling’s fours at 8:40 am.

Miami, fresh off a scrimmage against Syracuse on Sunday, is excited about the opportunity to race against some great talent, especially a perennial power like UConn and Division II power Dowling.

“Our team had a great scrimmage with Syracuse on Sunday, and we learned a lot about our potential–both as individuals and as a team,” stated UM head coach Robbie Tenenbaum. “We are looking forward to the first of two great mornings of racing. I am so proud of how our team has responded this past week to a very high work load, both on land and on the water.”

Dowling is coming into Wednesday’s race having great success in the past few years as a Division II powerhouse. They own four-of-seven rowing titles. The rowers are led by head coach Peter Lee, who has led them to a first place finish at the Dad Valis in the past, as well as a first team bid to the NCAA National Championship Regatta in 2006-07. Dowling finished third in last year’s NCAA Championships.

The Huskies of Connecticut concluded their fall 2008 season with a fourth place finish at the Syracuse Invitational in November. The team competed in several events which were highlighted by success at both the Head of the Charles Regatta, as well as the Head of the Housatonic.

All of the races with UConn will be two boat races, beginning with the First Varsity Eight at 8 a.m. That will be followed by the Second Varsity Eight (8:15 am), continued with the Varsity Four (8:30 am), and finally concluding with the Novice Eight (8:45 am).

“UConn comes to Miami Beach to train every spring, and we are excited that we are able to get in another 2,000-meter race on our home waters,” expressed Tenenbaum. “Last spring we did controlled stroke rating pieces with UConn, but this year will be a great chance for us to test ourselves against them over the full 2,000-meter race course.”