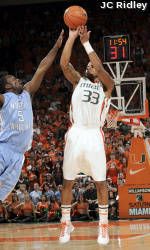 CORAL GABLES, FLA. – For the second-straight season, the University of Miami’s Jack McClinton was named to the All-Atlantic Coast Conference First Team in voting by 76 members of the Atlantic Coast Sports Media Association.

Miami’s first-ever All-ACC First Team pick as a junior in 2008, McClinton was one of just two repeat selections on the 2009 team joining four-time honoree Tyler Hansbrough of North Carolina. In addition, McClinton is the only All-ACC honoree – on any team – to also earn All-ACC Academic Men’s Basketball Team recognition this season (his third straight).

An All-ACC Third Team selection in his first season competing for the Hurricanes in 2006-07, the senior guard repeated as a first-team pick this season after once again leading the league in three-point field goal percentage (.464), three-point field goals per game (3.1) and free throw percentage (.885), while ranking third in scoring with 19.7 points per game – including an 21.8 point average in ACC games (second-best in the league).

In addition, the Baltimore-native is the ACC’s all-time leader in three-point field goal percentage (.443) and ranks second in career free throw percentage (.900).

With 15-games of 20-or-more points this season – including three-straight 30-point games versus Wake Forest, Duke and North Carolina, McClinton has leapt 17 spots into seventh place among Miami’s all-time leading scorers with 1,655 points in just three seasons as a Hurricane, while setting the school record for three-pointers (275) along the way.

McClinton is just the second Hurricane in program history to earn back-to-back first team all-conference honors. All-American Tim James was the first to do so as he was named to the First Team All-Big East in 1997-98 and 1998-99.