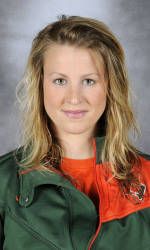 Miami Beach, Fla. – The University of Miami rowing team had a stellar performance on Sunday morning on the Indian Creek waterway taking part in a scrimmage against Big East power Syracuse.

The races were a controlled stroke rate scrimmage against the Orange. The competition consisted of four pieces each four minutes in length. The stroke rates for the pieces were 24, 26, 30 and back down to 24 for the fourth piece.

There were no official scores or times taken today, but the Hurricanes First varsity Eight finished first in the last three pieces, and just a few seats behind in the first piece. The Second Varsity Eight was a back-and-forth affair between the `Canes and Orange. Each team won some of the pieces in the race.

“This was a tremendous racing opportunity for our team today,” expressed said UM head coach Robbie Tenenbaum afterwards. “We competed well, and our boats attacked throughout the four pieces. I am most proud of our efforts and execution on the water today. We worked very hard in practice this past week, and it really showed this morning. Our team is extremely excited for our first full 2,000-meter race against Dowling.”

The Novice Eight crews from both teams competed as well towards the end of the morning session, while Syracuse finished ahead in all of the racing action during novice competition.

“The team and I noticed some areas where we could all improve, and we all made some pretty major adjustments,” stated Tenenbaum. “This wasn’t just for the rowers and coxswains, but the coaching staff as well. It is a great feeling to see the fruits of our efforts pay off.”

The Hurricanes start the competitive portion of their schedule next Wednesday, Mar. 11 at home on the Indian Creek against Dowling College. That race will serve as their first full 2,000-meter race, before turning around to face Connecticut the following day.