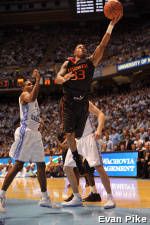 McClinton was among a group of eight to earn the recognition this season, requiring a student-athlete to earn a 3.00 grade point average for the previous semester and maintain a 3.00 cumulative average during his academic career.

In 2007-08, McClinton was the only First Team All-ACC pick to also earn All-ACC Academic Team accolades.