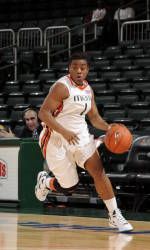 Seniors Lamese James, LaToya Cunningham and Latoya Drake played their final home game for the Hurricanes and were recognized in a pre-game ceremony for their contribution to the development to the program.

James, who scored a career-high tying 17 points just three days ago at North Carolina, followed that up with a 16 point effort against the Terrapins.  The Hollywood, Fla. native matched her career-highs with seven made field goals, two of them three-pointers.

Miami was led offensively by freshman Riquna Williams, who for the seventh time this season, led her team in scoring, with 17 on the day.  The Pahokee, Fla. native also led the ‘Canes with four steals.

Overall the game was played cleanly, with each team committing only 11 turnovers.  However, Maryland owned the glass, out-rebounding the smaller Miami team 52-35.  On the offensive end, the Terrapins grabbed 21 rebounds, leading to 24 second-chance points.  The Maryland advantage, with Miami only able to convert its 13 offensive rebounds in eight points, proved to be the game’s deciding factor.

Coming into today’s contest, the Hurricanes had clinched the 10th-seed in the conference, cementing the fact that they would face the No. 7 seed.  With Georgia Tech’s victory over Virginia Sunday afternoon, The Boston College Eagles are that seventh-seed.

Miami and BC will meet in the ACC Tournament’s opening round game on Thursday, March 5 at 6 p.m. at the Greensboro Coliseum in Greensboro, N.C.

“We can still write our own story. Go to the ACC Tournament and have a Cinderella story.  That’s what I’m hoping for,” said James.