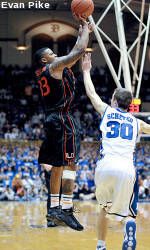 Coral Gables, Fla… – The University of Miami’s Jack McClinton has been named ACC Player of the Week after averaging 33.0 points, 3.0 rebounds and 1.5 steals as the Hurricanes defeated sixth-ranked Wake Forest, 79-52, on Wednesday and fell at No. 4 Duke on Saturday in overtime 78-75.

McClinton also earned Player of the Week accolades from CollegeHoops.net.

Against the Demon Deacons, McClinton tallied 32 points, including a season-high six three-pointers as Miami set school records for the largest margin of victory (27) against both a ranked opponent and an ACC opponent. Three days later, McClinton scored a season-high 34 points in Cameron Indoor Stadium and forced overtime with a 28-foot three-pointer with 20 second left to play. The 6-1 senior guard scored Miami’s final 11 points of regulation and all seven overtime points.

With 66 points between the two games, McClinton moved up three spots to claim eighth place among Miami’s all-time leading scorers with 1,537 points in three seasons with the Hurricanes.