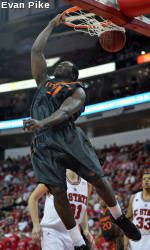 Coral Gables, Fla… With the first half of its ACC slate now completed, the Miami Hurricanes open a challenging stretch beginning with Wednesday’s home game versus No. 6/7 Wake Forest. The Hurricanes will have three games over the next 12 days against teams that have all been ranked No. 1 in the nation this season.

After Wednesday’s game versus the Demon Deacons, Miami will travel to No. 3/4 Duke – who lost its No. 1 ranking following last week’s loss to Wake Forest, and then return home to face No. 4/3 North Carolina, who was dethroned of the top spot by Wake in early January.

Regardless of who Miami lines up against, the Hurricanes come out ready to compete behind the lead of senior guard Jack McClinton. A Preseason All-ACC selection, McClinton is averaging 18.4 points per game, the fifth-best average in the ACC this year, including a league-best 2.9 three-pointers per game at an ACC-high .445 clip. He currently has 10 games of 20-or-more points this season and leads the team in assists at 3.2 per contest. In last season’s NCAA Tournament, he scored 38 points in the win over Saint Mary’s and nearly led his team past second-seeded Texas in the second round.

Junior forward Dwayne Collins is adding a strong presence in the post for the Hurricanes, averaging 12.2 points and a team-high 7.6 rebounds per game. His 3.3 offensive boards per game are fourth best in the conference, while he is shooting a team-high .622 from the field.

Tickets begin as low as $10 and can be purchased by calling the Hurricane Ticket Office at 1-800-GO-CANES.