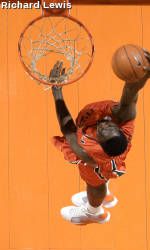 NEW YORK, NY (AP) -Jack McClinton scored all of his 20 points in the game’s first 26 1/2 minutes and James Dews had seven of his nine in a 9-0 second-half run as Miami beat St. John’s 70-56 on Saturday at Madison Square Garden.

McClinton matched his season high with five 3-pointers, including two in the second half when Miami retook control of the game. The first was on an inbounds play with 14:21 to play and the second was from about 26 feet and gave the Hurricanes (8-3) a 46-36 lead with 13:46 left.

It was McClinton’s third-straight game of 20 points or more and his fifth of the season.

Dews started Miami’s run that broke the game open with a 3 and he ended with a jumper that made it 55-39 with 9:35 left.

Freshman guard Quincy Roberts had a season-high 14 points for the Red Storm (9-3), who lost their second straight game to a current Atlantic Coast Conference team that used to be a member of the Big East. St. John’s lost to Virginia Tech last Sunday in the championship game of the Aeropostale Holiday Festival, also at Madison Square Garden.

McClinton, who was 5-of-7 from 3-point range, scored six points as Miami closed the first half on an 11-2 run to go up 38-28. St. John’s was within 40-36 as the Hurricanes missed their first nine shots of the second half, before McClinton hit back-to-back 3-pointers to extend the lead to 10. St. John’s was never closer than seven points the rest of the game.

Dwayne Collins added 16 points for Miami, which has won four of five, while redshirt freshman center Julian Gamble had a career-high 10, one off his total for the season.

Paris Horne added 13 points for the Red Storm, who played without starting point guard Malik Boothe, who is expected to miss about two weeks after having surgery on his left thumb.

Justin Burrell, the third-leading scorer and rebounder for St. John’s, returned after missing two games because of facial fractures from hitting heads with a teammate in practice. He played with a plastic face mask and had 10 points on 4-of-6 shooting and two rebounds in 21 minutes.

The Hurricanes improved to 4-1 away from home and have won three of their last four games versus Big East teams.