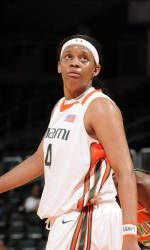 CORAL GABLES – The University of Miami women’s basketball team (8-3) didn’t have its best game of the season, but relied on their talent in an 83-65 win over Grambling State (2-7), Sunday afternoon at the BankUnited Center.

Lamese James came off the bench, scoring a team-high 17 points. The senior also grabbed six rebounds and had her hand in on two steals. Joining James with double-digit point totals were freshmen Shenise Johnson and Riquna Williams, who had 11 apiece.

The Hurricanes were outrebounded and were under 50 percent shooting from the free throw line but their bench outscored the visitors 47-17.

The `Canes tightened things up in the second half as their defense only allowed the Tigers to shoot 30 percent from the field. Midway through the period Miami had built itself a game-high 25 point lead. Individually, Williams displayed her explosiveness, as she scored 10 points and grabbed five rebounds after the break.

LaToya Cunningham only scored six points but the senior guard dished out a game-high seven assists, the most since the nine she had in the season-opener against Norfolk State. Charmaine Clark pulled down a season-high nine rebounds to go with her four assists and four points.

Johnson, who started the game 4-4 from the field recorded four steals in the game, the fifth time this season that she has had at least that many steals.

Grambling State was led by Rachele Dobbins, who had game-highs in points and rebounds with 18 and 14 respectively. Kristen Harper added 14 points and Whitney Brown scored 11 as the other Tigers to score in double-figures.

Miami returns to the BankUnited Center as they host the UM Holiday Tournament, Jan 29-30. Traveling to Coral Gables for the tournament will be Brown, the Hurricanes first round opponent, Duquesne, and 10th-ranked Auburn. For ticket information, please call 1-800-Go-Canes or visit hurricanesports.com.