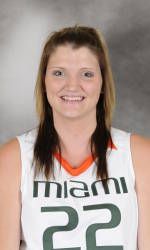 CORAL GABLES – The University of Miami women’s basketball team (3-2) played suffocating defense in a 64-51 victory against the Austin Peay Lady Govs (2-3), in the first round of the UM Thanksgiving Tournament, Friday evening at the BankUnited Center.

Three nights after posting 16 points, with five three pointers, senior LaToya Cunningham scored a career-high 19 points on 7 of 12 shooting. Three of her buckets were from behind the arc and she now has a team-high 14 on the season.

Freshman Shenise Johnson and junior transfer Ashley Sours also scored in double figures with 16 and 10 points respectively. Sours had the best performance of her five-game Hurricane career as she added a team-high eight rebounds and a pair of blocks.

Miami played superb defense in the first half, allowing only 12 Lady Governors points. The game was tied at eight with 15:39 remaining in the half and Austin Peay didn’t score a single point until there was only 33 seconds left on the clock. During the Lady Govs 15-minute scoring drought, the Hurricanes scored 17 points and led 25-8. After a Lauren Jones’ layup and a pair of Emily Pollack free throws, Cunningham sank the game’s first three-pointer at the buzzer, sending the `Canes into the locker room with a 28-12 advantage.

At the end of the half Miami had already picked up 15 steals, forced 20 turnovers and held the visitors to 26 percent shooting from the field.

As dismal as Austin Peay’s offense was in the first half, it was equally as impressive in the second, as they cut Miami’s lead to seven points at 44-37, with 8:31 to go. The Lady Govenors hit 17 of their 33 shots in the second period, but Miami scored when they needed to and pulled away once again to close out the contest. APSU’s Nicole Jamen scored 14 points and grabbed 10 rebounds to lead her team. Pollack also dished out 11 assists but committed a game-high 11 turnovers.

Each time Austin Peay seemed to grab a bit of momentum, Johnson closed the door with her clutch free-throw shooting. She was 6-6 on the night, all in the second half and is now shooting .957 from the charity stripe on the season.

For the second straight game, Charmaine Clark led Miami in assists, with five on the night. The junior added two blocks and two steals to go with her four points.

The Hurricanes will face Santa Clara in tomorrow’s championship game, tip-off will be approximately 20 minutes after the conclusion of the Miami men’s basketball game. The 21st-ranked men face in-state foe Stetson at 3:30 p.m.

Santa Clara picked up their first win of the season after trailing by as much as 12 to Chicago State, giving first-year head coach Jennifer Mountain her first career win.