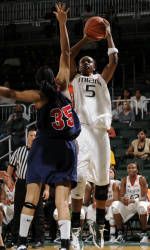 Coral Gables, Fla. — The University of Miami men’s and women’s basketball teams pushed back the start times of their tripleheader on Sat., Nov. 29 at the BankUnited Center.

The UM men’s basketball team (3-1) comes off Monday’s 80-45 rout of 2008 NCAA Tournament team San Diego to finish third in the U.S. Virgin Islands Paradise Jam. Jack McClinton, who earned Paradise Jam All-Tournament Team honors after pouring in a game-high 27 points versus No. 2/2 UConn, averages a team-high 16.8 points per game, while Dwayne Collins averages a double-double of 14.0 points and 10.8 rebounds per game.

Following Saturday’s game versus Stetson (2-2), the Hurricanes play host to Ohio State (2-0) in the ACC/Big Ten Challenge at the BankUnited Center on Tues., Dec. 2 at 7 p.m.

The UM Thanksgiving Tournament games on Fri., Nov. 28, remain as originally scheduled. Santa Clara and Chicago State will square off in game one at 5 p.m., followed by Miami vs. Austin Peay at 7 p.m.

Miami’s women’s team is led by newcomer Shenise Johnson who is averaging 17.3 points and 9.3 rebounds per game for the Hurricanes, while Latoya Drake adds 11.7 points an outing.

Tickets can be purchased for all Hurricanes games by calling 1-800-GO-CANES or visiting us online.