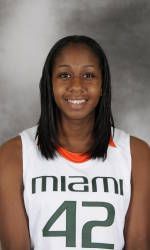 CORAL GABLES – The University of Miami women’s basketball team (1-1) could not overcome a messy first half and fell to the Wisconsin-Green Bay Phoenix (2-0), 63-61 at the BankUnited Center, Sunday afternoon.

The Hurricanes dug themselves a hole they were never full able to recover from, as they turned the ball over 20 times in the first half, matching their point total. Miami had 12 turnovers before they hit their first field goal and trailed Green Bay 13-0 after eight minutes of play. At the half, UM trailed 33-20.

However, after the forgettable first period, the Hurricanes made a furious second-half rally. Led by freshman Shenise Johnson and sophomore Diane Barnes, Miami chipped away at the Phoenix lead. Johnson scored 13 of her team-high 19 points and Barnes, whose playing time was limited due to foul trouble, scored all of her career-high 14 points after the break.

With 47 seconds remaining in the game, LaToya Cunningham’s steal led to a Barnes lay-up, cutting Green Bay’s lead to only two points at 61-59. Just 18-seconds later, Cunningham stripped Kati Harty, and fed the ball to Johnson. The freshman attacked the rim, but the ball was knocked out of play. The Hurricane in-bounds play went to Barnes, who made an acrobatic lay-up to tie the game with four seconds remaining.

Four seconds was just enough time for Green Bay to quickly in-bounds the ball and race down the court, behind the Miami defense and end the game on a Rachel Porath lay-up.

The Hurricanes only turned the ball over five times in the second half shot the ball at a 52 percent clip, after going 7-25 in the first. Miami forced 24 turnovers of their own for the game and each team capitalized for 25 points a piece on turnovers.

In both games this season, the Hurricanes have dominated the boards, more than doubling their opponents total, 43-21. Johnson, grabbed a game-high 12 rebounds, as she recorded a double-double in her second collegiate game.

Miami will have five days to prepare for their first road game of the season, as they travel to the Lone Star State to take on Houston on Friday, Nov. 21.

After the Houston game, The Hurricanes will face FIU on Tuesday, Nov. 25 before they return to the BankUnited Center on Friday, Nov. 28 in the first day of the UM Thanksgiving Tournament. For ticket information, please call 1-800-Go-Canes or visit hurricanesports.com