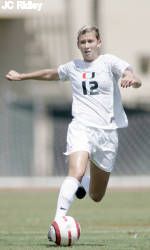 GAINESVILLE, Fla. – In their third NCAA Tournament match in program history, The University of Miami women’s soccer team (10-9-3) fell to the UCF Knights (14-5-3), 3-1 at the University of Florida’s James G. Pressly Stadium.

“I am extremely disappointed. I thought that was one of our best games as far as our performance and our effort and our ability to create the attack,” said head coach Tricia Taliaferro. “I think we made some crucial errors, mental errors, and you can’t do that when you play in the NCAA Tournament and when you play quality opponents like UCF.”

At the 22-minute mark, freshman Julianne Rickers scored the first goal of the match on a turnaround blast from the top left of the 18-yard box. The line-drive shot went over the head of the keeper.

The flow of the game in the opening half seemed to be dictated by the Hurricanes, but less then 10 minutes after the Rickers’ goal, UCF answered with a goal of their own, as Danielle Dos Santos took a Lauren Halbert pass for an easy tap in from six yards out.

In the 38th minute, UCF was the beneficiary of a call in the Miami box, resulting in a penalty kick. Vikki Alonzo who saved a penalty kick in a match earlier in the season, anticipated a shot the left, but Lauren Halbert placed her kick into the right side of the net.

Miami outshot the Knights 8-3 in the opening period and held a 6-1 advantage in corner kicks as Rickers recorded three first-half shots, but still trailed 2-1.

For the game, Miami held a 14-10 advantage in shots, but UCF found the net on three of their six shots on goal.

All three of the Hurricanes NCAA Tournament appearances have resulted in first-round losses in Gainesville.

The contest was the final match for seniors Corynn Carino, Jordan Ross and Rachael Rigamat.

“I think we came out really, really hard and played and awesome game. We outplayed them the whole game, we just couldn’t get the result that we wanted,” said Carino.  “I couldn’t be more proud of this team and the entire season. I’m going to miss playing with them.”

On the season, Miami finished with 10 wins, the fourth time in program history. Tricia Taliaferro’s team received their second consecutive invite to the NCAA Tournament.

“I am extremely proud of our team. The future of Miami Soccer is unbelievable. I think you saw that in the first half of the season when we went 7-0 and unfortunately we had some injuries, but I think it made us a better soccer team – having to overcome adversity,” added Taliaferro. “We are only graduating one player that was on the field tonight and I am extremely proud and look forward to the future.”