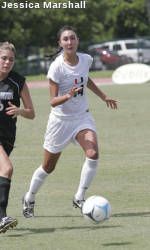 CORAL GABLES – The University of Miami women’s soccer player Brittney Macdonald has been selected to the ESPN The Magazine Academic All-District Team. Macdonald was selected to the second team along with six other ACC student-athletes.

Macdonald, a sophomore from Littleton, Colo., was honored for carrying a 3.971 GPA while majoring in Biology. She is the first member of the women’s soccer team to earn the honor since Laura West in 2001.

The standout defender has been crucial to Miami’s school record 11 shutouts this season. For the second straight season Macdonald has led the Hurricanes with minutes played and this year she scored two goals, giving her three for her career.