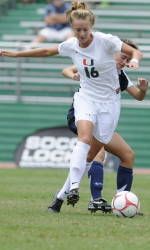 The Hurricane defense was solid throughout the game only allowing low percentage shots, but with only 22 seconds left in the first half, let a Kaila Sciascia shot get to the back of the net off a corner kick.

Miami had their best scoring opportunities after the break. First, when Lauren Singer found herself alone against the Maryland keeper, Mary Casey, but her shot was stopped, keeping UM scoreless. Then in the 78th minute, Beverly Goebel took a Paulelette Ricks-Chambers cross, but a diving save by Casey thwarted the scoring opportunity.

After starting the season with seven straight victories the Hurricanes have hit a stretch of seven straight games without a win, including a 0-3-1 start to ACC play.

However, Miami has a week to recouperate before they return to the pitch next Sunday, Oct. 11, when they face the 2007 NCAA Finalists, Florida State. Game time is set for 12 p.m. at Cobb Stadium.