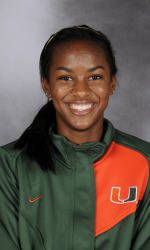 CORAL GABLES – The University of Miami women’s soccer team (7-2-2) gave up an early goal to the Virginia Tech Hokies (5-3-1), but Paulelette Rick-Chambers’ first goal of the season in the 89th minute gave the Hurricanes a 1-1 double-overtime tie in the ACC opener for both teams.

The Hurricanes knew the danger that the long throw-ins from Virginia Tech’s Julian Johnson could pose. However, Johnson long toss in the fifth minute somehow found the foot of Emily Jukich deep in the box. Jukich’s shot went just inside the far post for the early goal.

“It was disappointing to give up that first goal, especially since we knew what to expect,” said associate head coach Jeff Freeman.

After that, Miami buckled down on defense. Freshman goalkeeper Vikki Alonzo was only counted on to make two saves the remainder of the night, as the defense allowed 13 shots for the game.

The Hurricanes made adjustments at the half and came out for the second period focused on putting pressure on the opposing defense by winning more 50-50 balls.

The play of Brittany Macdonald in the middle considerably improved Miami’s chances. The offense took a total of nine shots in the final half of regulation, none more important than the one in the 89th minute. Ricks-Chambers took a shot from the right side of the box, it was blocked, but the deflection came right back to her and she buried it inside the far post, tying the game at one.

The two overtimes saw the Hurricanes hold a 4-1 advantage in shots, one of them on goal.

“You never know what to expect in an ACC game,” added Freeman. “Paulelette and Brittany Bucknor played maybe the best games they ever have tonight for us.”

Ricks-Chambers led the Hurricanes with five shots and Bucknor’s speed and pace off the bench helped Miami gain momentum in the second half.

The Hurricanes will not have long to rest from Thursday night’s physical game, one that featured four yellow cards and 22 fouls, as the face a very tough No. 14 Virginia team this Sunday, Sept. 28 at 1 p.m. at Cobb Stadium.