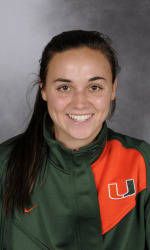 Hurricanes Close Out Homestand With 2-0 Win Over FAU

CORAL GABLES – The University of Miami women’s soccer team (3-0-0) was held scoreless in the first half by Florida Atlantic (1-2-0), but scored twice in the second to claim the 2-0 victory, Sunday afternoon at Cobb Stadium.

For the second consecutive match the scoring was started by a Miami freshman. This time Ashlee Burt had the honors in the 57th minute with her first collegiate goal. The Saddle River, N.J. native took a shot from the right goal line that deflected off a FAU defender before hitting the far post into the goal.

“We were focused on coming out stronger in the second half and to put more pressure on the other team,” said Burt. “For me to break the scoreless tie was really exciting.”

The goal came after a very tough first half where there was a total of three shots on goal. FAU’s best scoring opportunity came in the 17th minute, after a penalty just outside the box gave the Owls a free kick. FAU’s Ashley Mannarino fired a shot to the right side of the goal, but Miami keeper Vikki Alonzo dove to her left to secure her only save of the match. Alonzo has only allowed one goal in three games this season, recording two shutouts.

The Hurricanes scored again in the 79th minute after a couple touch and go passes between freshman Brooke Van Aman and junior Beverly Goebel. Van Aman eventually fed Brittney Steinbruch at the top of the 18-yard box, the team’s leading scorer then fired a shot into the back of the net. The goal was the fourth on the season for Steinbruch.

Senior captain Corynn Carino knew Miami would be fine in the second half, “We controlled the tempo in the first half but couldn’t come up with any chances,” she said. “But we increased the intensity and made better tackles and the opportunities came to us.”

Head coach Tricia Taliaferro prepared the Hurricanes for games just like this, “We really showed our fitness level in the second half, we came out and put a lot of defensive pressure on the ball and won the 50-50 balls.”

The Hurricanes ended the season-opening homestand with a 3-0 record and now they will hit the road for two matches, as they face Arkansas-Little Rock and Memphis. The first match will be Friday, Sept. 5 followed by Memphis on Sunday, Sept. 7. Tickets will be on sale, $3 for children and $5 for adults.