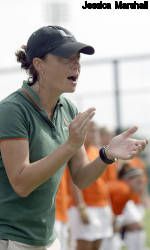 CORAL GABLES – The University of Miami women’s soccer team is preparing for the 2008 season and will open at Stetson on Aug. 22. One week into fall practice, head coach Tricia Taliaferro sat down with hurricanesports.com and gave her thoughts on the upcoming season.Last season you led Miami to its second NCAA tournament appearance, what do you think you can take from last season’s success into the 2008 season?The success we experienced last season was due to years worth of work. Since the first day I stepped on campus at Miami, I had a vision to build this program to national prominence. Over the last five years I have been very fortunate to attract some of the best players and coaches in the country to be a part of it. We are all driven to be invited to the tournament again and realize what commitment it takes on a daily basis to do it. Each individual is willing to accept a role to enable us to have a successful chemistry within our group. The opportunity to compete in the first round made us very proud, but also drives us to improve.You have another good recruiting class this year. Do you expect any of the newcomers to make an immediate impact?I believe every one of the recruits can make an impact on the field. We only recruit players that can improve the team and be able to grow with the program over the years. The impact they make will be up to them and how willing they are to compete all out. They must be competitive, confident and consistent in training to get a chance to wear the Miami jersey in a game. I am very excited about this class and know they will be successful from day one.What is the mindset of the team as it enters the 2008 season? Are there any specific goals?We are hungry to taste victory again and have worked extremely hard over the last nine months to do that. The goals for this team are to improve our ACC regular-season standing and win in the NCAA Tournament. When you come into this program, it is very clear what direction this program is headed.With the graduation of the most prolific goalkeeper in Hurricane history, Lauren McAdam, what do you expect from her replacement and the defense as a whole?Lauren will be difficult to replace but, a lot of her success last year was due to team defending. We pride ourselves on a tough, in-your-face mentality, starting with our forwards and moving through each line on the field. Our physical style is difficult to withstand for 90 minutes and our philosophy is every opponent must earn what they get. We have worked too hard to give a pass, tackle or shot to anyone and the players take it personally.Last season, Brittney Steinbruch was selected as the ACC Freshman of the Year and you were named the ACC Coach of the Year. What do you think of those honors and do you think that can translate into more success in 2008?I am very proud of the awards and both Brittney and I know it was a result of the team effort. We look forward to this season and take responsibility to perform at the same level in search of the championship. The best part of this team is how selfless each one of us is in striving to achieve the team goals we have set. The secret is out about Miami soccer and we know it will be harder this season, and we look forward to the challenge.Every year the ACC is rated the best in women’s soccer. Why do you think that is and what do you expect from the team this season? The ACC has a proven tradition of attracting the best student-athletes in the country to compete for national championships. Most soccer players are good students and want to be challenged academically and athletically. All the schools in the ACC have something different to offer depending on the student desires. Academic degree, size of school, location, we have it all! The conference is committed to giving the best experience to each athlete and team involved. I think the professionalism in this conference is the reason we are successful year after year. There is a standard to maintain, to be able to be respected in this conference and we embrace that at Miami. I look forward to climbing up the ranks in the ACC because if you do that a national championship is in sight!