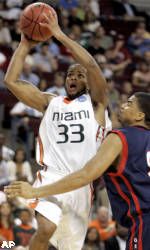 NORTH LITTLE ROCK, Ark. (AP) – Jack McClinton is now a star in the state of Arkansas – and not because his last name sounds sort of familiar around these parts.

Instead, McClinton dazzled the locals with his quick drives to the basket and long 3-pointers, scoring a career-high 38 points in seventh-seeded Miami’s 78-64 win over 10th-seeded Saint Mary’s on Friday.

And here’s a scary thought: McClinton might not have been at full strength.

“I had a fever a couple of days before the game,” he said. “Our trainers got us on the meds and I felt pretty good for the game today.”

Sure looked like it. Miami trailed 32-27 at halftime. In the second half, the score was McClinton 32, Saint Mary’s 32.

“Second half I was just trying to be more aggressive, drive the ball,” McClinton said. “Once I made a couple of shots, the defense was kind of on their heels.”

Playing just across the Arkansas River from Bill Clinton’s presidential library, McClinton scored 10 straight points for Miami early in the second half, part of a 25-5 run that gave the Hurricanes a 52-38 lead. Miami (23-10) missed all six of its 3-point attempts in the first half, but McClinton alone made three in the second.

Hurricanes coach Frank Haith now faces a second-round matchup with second-seeded Texas in the South Regional on Sunday. Haith was an assistant for the Longhorns under Rick Barnes before taking over at Miami. Texas beat 15th-seeded Austin Peay 74-54 in the game immediately following Miami’s.

“I always pull for Texas,” Haith said. “It’s my best friend and I love the guy. I really don’t want to play against him.”

Miami, which was predicted to be the Atlantic Coast Conference’s worst team this season, now has won 8 of 11, part of a remarkable turnaround after a 12-20 record a season ago. Another performance like this from McClinton, and maybe Hurricanes fans can take an extended break from chatting about spring football.

Early on, Miami couldn’t do anything right. The Hurricanes fell behind 9-2 and turned the ball over six times before the second official timeout. One errant pass sailed right into the arms of Saint Mary’s coach Randy Bennett.

Miami was 1-of-9 from the field before James Dews scored an easy basket off an inbound pass.

The Gaels had their own problems with turnovers, but they pushed their lead back to seven near the end of the half and appeared comfortable after a long trip from California.

They shouldn’t have been. McClinton had scored Miami’s last four points of the half and was beginning to assert himself.

“All we talked about at halftime was McClinton,” Bennett said. “He’s got a will to win, a will to take over the game.”

Saint Mary’s has won only one NCAA tournament game. In 1959, the team had a first-round bye in a field of 23 teams. After beating Idaho State, the Gaels were a win from the Final Four, but they lost to eventual national champion California.

Patty Mills, a freshman from Australia, snapped out of a shooting slump from 3-point range against Miami. He made three shots from long distance in the first half and six for the game, earning cheers of “Aussie, Aussie, Aussie, Oi, Oi, Oi” from the Saint Mary’s supporters.

Mills, one of four players on the Saint Mary’s roster from Australia, scored 24 points. He and McClinton were the only players in double digits.

“I had a lot of opportunities during the game I could have made the most of,” Mills said. “But that’s the NCAA tournament experience. They came at us with everything.”