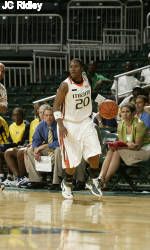 The <?xml:namespace prefix=”st1″ ns=”urn:schemas-microsoft-com:office:smarttags”?>University of Miami women’s basketball will host the University of Virginia Cavaliers in the Hurricanes first home game in 16 days, Monday at 5 p.m. at the BankUnitedCenter. <?xml:namespace prefix=”o” ns=”urn:schemas-microsoft-com:office:office”?>

Miami has had eight days to prepare for Virginia and to recover from their heartbreaking, last-second loss at Georgia Tech. Senior Maurita Reid and LaToya Cunningham scored 18 and 15 points respectively, in the 65-68 loss on a three-pointer in the final moment or regulation.

Reid leads the `Canes with 16.5 points a game and has hit four or more three-pointers in 10 games this season.  Miami’s other seniors are playing well too.  Carla Williams has scored double figures in each of the last two games and Albrey Grimsley has been one of Miami’s most consistent players, with a team leading 3.6 assists per game.

A Look at Virginia

Virginia was one of three teams that had an unblemished ACC record, but lost their last game to another unbeaten, No. 4 Maryland on Friday.

The Cavaliers have two starters that are averaging double figures in scoring.  Monica Wright leads the team with a 17.6 scoring average and Aisha Mohammed averages just shy of a double-double with 12.6 point and 9.1 rebounds per game.

Head Coach Debbie Ryan has been at the helm of the Virginia team for 31seasons, amassing 664 career wins.

The Cavaliers of Virginia have won four of the five all-time meetings with the Hurricanes, including three in a row.  Last season Virginia defended their home court with a 73-60 victory.

In 2006 these teams met two times with Virginia winning both, the second was in the WNIT Postseason Tournament, 83-72