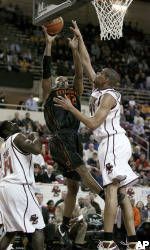 BOSTON (AP) – Tyrelle Blair blocked five shots against Miami, and that was enough to make the Hurricanes worry about him every time they put the ball up.

“I think he changed more shots than he blocked,” Boston College coach Al Skinner said after the Eagles beat No. 21 Miami 76-66 on Tuesday night. “That’s probably as important.”

Blair had 11 points and 12 rebounds to go with his blocks, and Rakim Sanders scored 20 points to lead BC to its 13th consecutive victory over the Hurricanes. Tyrese Rice had 14 points, eight rebounds and six assists as BC (12-4, 3-0 Atlantic Coast Conference) beat a ranked opponent for the first time since last February.

Jack McClinton scored 20 points on 6-for-26 shooting for Miami, which had won consecutive games since it lost to Winthrop on Dec. 29 to snap a season-opening 12-game winning streak. James Dews scored 15 points for the Hurricanes (14-2, 1-1), who would have tied the best start in school history with a win.

The Eagles had lost two of three — a 25-point defeat to No. 3 Kansas and another that was even more embarrassing: 57-51 at home to Robert Morris last Monday.

“Coach called us out after the Kansas game,” Rice said. “We took it to heart. We tried to prove that we could be better than people think we can.”

Boston College scored 14 of the first 16 points and led 50-27 with 11:26 to play before McClinton hit a 3-pointer to start a 23-10 run that pulled Miami back into the game. He had 13 points in all over the five-minute span, including three 3-pointers.

The Hurricanes were still down 68-58 with 3:13 left, but despite their full-court pressure and fouling they couldn’t get any closer than nine points. BC hit 14 of 18 free throws down the stretch.

It was BC’s first victory over a ranked opponent since it beat then-No. 16 Virginia Tech last Feb. 3.

Miami, which leads the ACC in 3-point percentage, was just 8-of-26 from beyond the arc, making 3-of-13 in the first half. Miami missed its first 13 3-point attempts in Saturday’s victory over Georgia Tech, and missed 14 of its first 15 shots overall against BC.

“We came out with a nonchalant attitude and didn’t execute as well as we should have. That attitude put us in a hole,” McClinton said. “It’s on us. There’s really nothing the coaches can do. We have to prepare for the challenge.”

The Hurricanes missed their first five shots before McClinton hit a jumper, while Boston College scored the first eight points of the game and opened a 14-2 lead with 13:21 left in the first half.

The Eagles made it 20-4 before the Hurricanes strung some offense together, cutting the deficit to 20-10 on two 3-pointers by Dews. BC took a 17-point lead on John Oates’ 3-pointer with just under 2 minutes left and led 36-22 at halftime.