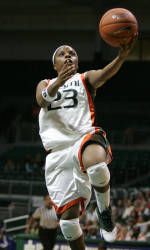 <?xml:namespace prefix=”st1″ ns=”urn:schemas-microsoft-com:office:smarttags”?>Atlanta, Ga. – The University of Miami women’s basketball team (8-10, 1-2) were unable to hold on to an 11 point lead with six minutes to go and lost on a Georgia Tech Yellow Jacket (15-2, 2-1) last second three-pointer at the Alexander Memorial Coliseum.<?xml:namespace prefix=”o” ns=”urn:schemas-microsoft-com:office:office”?>

From the tip to the final horn the game was played at a frenzied pace.  There were 49 turnovers between the two teams, as Miami committed a season-high 27.

The Hurricanes led 30-28 at the break, using a balanced offensive attack.  Seven UM players had at least one field goal in the half, with Maurita Reid leading the way with seven points.

Even with the turnovers, the Hurricanes were able to build an 11-point lead with just over six minutes to go in the game.  Reid had two three pointers early in the second period and freshman Epiphany Woodson did her part, to build the lead with a three-pointer of her own to open the half.

Carla Williams was strong again for the `Canes as the senior center grabbed seven tough rebounds to go with her 12 points, six in the opening minutes of the second half.

Three-point plays off of Miami turnovers led to the Yellow Jackets come-back.   Chioma Nnamaka hit back-to-back three-point field goals, cutting a nine point UM lead to three.  A missed layup on Miami’s next possession led to a Janie Mitchell and-one layup, drawing a foul on Williams.  Mitchell made the game-tying free-throw with 2:15 remaining.

The Hurricanes’ junior guard LaToya Cunningham seemed to answer every momentum turning Georgia Tech basket with a huge three-pointer of her own.  Her first field-goal from beyond the arc put Miami up ten with 7:23 to go in the game, but none was bigger than her shot from the left side, turning a one-point deficit into a UM 2-point lead with only 43 seconds remaining.

Jacqua Williams hit two free-throws tying the game at 65 with 32 seconds on the clock.  The Hurricanes brought the ball over half-court and Head Coach Katie Meier called time to set up a final play.  With nine seconds to go the Yellow Jackets got a break, as Albrey Grimsley was called for a carry.  The controversial call allowed Georgia Tech’s Alex Montgomery to hit the game-winner from the right corner.

Reid led all scorers with 18 points, Cunningham added 15, going three of four from behind the arc.

Miami will return to the BankUnitedCenter on Monday, Jan. 21 against Virginia.