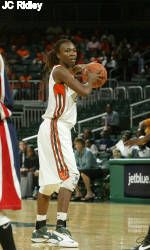 Senior Carla Williams was huge on the night for the `Canes as she scored a season-high 14 points, 12 in the second half.  With 51 seconds left and Miami down 59-58, with an assist from LaToya Cunningham, Williams scored over Clemson’s April Parker, drawing the foul, Parker’s fifth.  Williams hit the free-throw putting her team up 61-59.

After the made free-throw the Tiger’s Stefany Thomas drove through the lane and tied the game with 38 seconds to go.

Albrey Grimsley, another senior, was running the point for the Hurricanes in the final moments of the game and took the ball at the top of the key, drove to her left and drilled the pull-up jumper from 15 feet, giving Miami a two-point advantage.  Grimsley came into the game with a 1.63 assist/turnover ratio, good for fifth in the ACC.  She ended the night with a team leading 5 assists with only a single turnover.

Clemson then brought the ball over half-court and called their final timeout.  The Hurricanes denied any chance of an inbounds pass and forced Clemson to call a timeout they did not have.  The result was two technical foul shots for Maurita Reid, and Miami’s ball.  Reid hit one of two, closing the door on the Tigers.

Reid led all scorers with 23 points in the game, 18 coming in the first half.  That makes five straight games now that the senior as scored 20 or more points.  Reid was held in check for most of the second half, but with her team down five points with just over seven minutes to go in the game, she drove the lane for a lay-up.  Then, she picked off a reversal pass and took it the length of the court, pulling Miami within a point at 51-50.

Miami will remain on the road as they travel to Atlanta, Ga. to take on ACC foe Georgia Tech, this Sunday, Jan. 13 at 2: p.m.