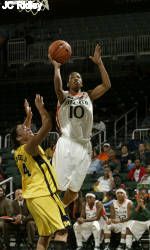 The <?xml:namespace prefix=”st1″ ns=”urn:schemas-microsoft-com:office:smarttags”?>University of Miami women’s basketball team (7-9) continues to play solid team ball against the nation’s best, but fell short Saturday night to the No. 12 Duke Blue Devils (12-3) by a 84-72 score at the BankUnited Center.<?xml:namespace prefix=”o” ns=”urn:schemas-microsoft-com:office:office”?>

LaToya Cunningham’s three-pointer with 4:24 to go in the first half tied the game at 33, but Duke would outscore the Hurricanes 13-1 heading into the break, proving to be the difference in the game.  Six of those points coming on Wanisha Smith shots from beyond the arc.

The Blue Devil’s owned the boards, out-rebounding Miami 47-28 on the night.  UM’s senior center Carla Williams left the game midway through the first-half, after an apparent leg injury.  The Hurricanes sorely missed her 6-5 frame as Duke’s 6-6 Chante Black was able to play offense against the much smaller UM squad.  Black finished the game tied with Smith with a team-high 16 points.

Miami’s senior guard Maurita Reid has always been a scorer, but with 22 points on the night, she has scored over 20, four straight games.  Even more impressive, she as matched her career-high with five three-pointers in each of the last four games.

Reid is not alone on a team that has continued to make strides since the beginning of the year, when seven  newcomers were brought in.  Albrey Grimsley, currently fifth in the ACC in assist/turnover ratio, dished out a season-best seven assists to only two turnovers.  The senior guard finished with 14 points on the night.

The Blue Devils came into tonight’s ball game third in the conference allowing only 53.6 points and forcing 23.8 turnovers per game.  Against the Hurricanes, they gave up 72 points and forced only 11 Miami turnovers.

The Hurricanes were picked in preseason coach’s and media polls to finish near the bottom of the ACC for the 2007-08 season.  However, one would be hard pressed to find a member of the Miami team that would believe that, proven by the way the `Canes have played against ranked teams so far this season.

Earlier in the season, at the Caribbean Classic in Cancun, Mexico, the `Canes found themselves within four points of then No. 8 LSU, with only minutes remaining.

Miami will travel to face Clemson on Jan. 10 at the Littlejohn Coliseum, tip-off is set for 7 p.m.