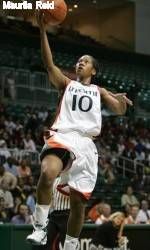 The University of Miami women’s basketball team (6-8) dominated play in a 90-57 lopsided win over Central Arkansas (2-11) at the BankUnited Center, in the consolation game of the UM Holiday Tournament.   <?xml:namespace prefix=”o” ns=”urn:schemas-microsoft-com:office:office”?>

From the start of the game, the Hurricanes never took their foot off the accelerator.  Coach Katie Meier had her squad come out in a frantic full-court press, leaving the Sugar Bears of Central Arkansas out of sync.

More impressively for <?xml:namespace prefix=”st1″ ns=”urn:schemas-microsoft-com:office:smarttags”?>Miami was their ability to score at will.  It came early, often and from many sources.  The `Canes shot a blistering 57 percent from the field, on their way to 47 first-half points.  Maurita Reid led the way with 18 points at the break, including four three-point field goals.

Senior Albrey Grimsley had a great game setting up her teammates as she tied her career-high with seven assists.  As a team, Miami dished out 25 assists, the most in a game since Dec. 28, 2005, when the team recorded 32 against North Carolina A&T.

Charmaine Clark, who has proved to be the Hurricanes best from the free-throw line, went 6-7 from the charity stripe on her way to 12 points, tying her season-high.

UM’s bench scored an impressive 37 points, but that stat stands out even more when compared to the three that UCA scored.

Miami prepares for Charleston Southern in their final game before the start of the ACC schedule.  Gametime is set for 4:30 p.m. Wednesday Jan. 2 at the BankUnitedCenter.  The No. 19 University of Miami men’s basketball team will play Penn following the women’s game.