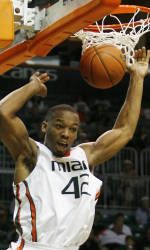 Coral Gables, Fla (www.hurricanesports.com) – Senior forward Raymond Hicks has been named the Muscle Milk Student-Athlete of the Week for the period December 13-23.

In three victories last week, Hicks averaged 13.7 points and 5.7 rebounds while connecting on 17 of 21 field goal attempts. Included in his performances was scoring a career high 16 points in Miami’s 95-64 victory over North Carolina A&T on Sunday, December 23.

With the three victories last week, the Hurricanes moved up to 19th in both the AP and the USA Today/ESPN polls and improved to 12-0 on the season.