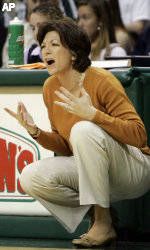 Coral Gables, Fla. – – The University of Miami women’s basketball team (4-4) came out on fire in the first half, but couldn’t maintain their momentum in the second as Florida International (2-5) pulled off a 60-58 come from behind victory at the BankUnited Center.

FIU’s LaQuetta Ferguson had a game-high 26 points to lead the Golden Panthers to victory. She scored 13 points in each half, including back-to-back three pointers late in the second period to tie and then give her team a 52-49 lead.

Maurita Reid once again led her team in scoring with 15 points. The senior’s playing time was limited in the second half due to leg cramps, but when she was in the game she didn’t show signs of slowing down. With the score 41-40 in favor of FIU, Reid drove down the lane and drew a foul and still made the shot. She missed the free-throw, but Lamese James was there for the put-back and the one-point deficit was turned into three-point lead, with only 10 minutes left in the game.

LaToya Cunningham didn’t miss her first three shots, two of them three pointers to begin the game. The junior point guard scored 12 first-half points, but FIU adjusted and Cunningham was unable to score in the second period.

UM’s bench out scored Florida International’s 19-0 but it wasn’t enough as FIU shot 50 percent from the field in the second half.

Miami will play Saturday afternoon at the BankUnited Center against Houston at 2:00 p.m., in the third of four straight home games.