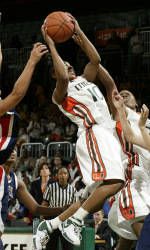 Charmaine Clark scored 11 points while Albrey Grimsley and Carla Williams each scored 10 points for the Hurricanes, who fell to 1-1. Regina Omoite scored 15 points and Ashley Williams poured in 14 points for JU. Gregoire went 4-of-9 from three-point range. Jacksonville shot 44 percent in the second half and finished shooting 40.4 percent for the game. The Dolphins forced UM into 22 turnovers, which resulted in 16 steals for JU. Miami controlled the boards, out-rebounding JU, 45-39.

The Dolphins took a 40-35 lead three minutes into the second half. The Hurricanes went on a 9-2 run to go ahead 44-42 after Reid made a three-pointer following three straight baskets from Carla Williams with 13:20 remaining.

Miami trailed 30-26 at halftime after jumping out to a 13-6 lead with 15:15 remaining in the first half on an Epiphany Woodson lay-up on a fastbreak. JU cut their deficit to 15-14 at the 11:12 mark when Ashley Williams made a layup in the paint.

The Hurricanes used a 7-2 run to go ahead 22-16 on a Reid three-pointer and a short jumper by Diane Barnes with 8:39 to go, but the Dolphins closed the half on a 14-4 run for the four-point halftime lead. Gregoire had nine points and Ashley Williiams Williams added eight points in the half for the Dolphins.

Miami continues its five-game homestand Monday, Nov. 19 when the Hurricanes take part in the ACC/Big Ten Challenge by hosting Michigan at 7 p.m. at the BankUnited Center.