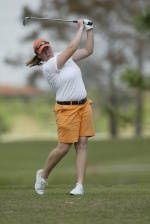 Steward, who entered the day tied for 16th following a first-round 75, recorded the lowest round of the day as she finished tied for third on the individual leader board.

Miami’s four-member team of Steward, freshmen Christina Hirano and Maria Ronderos and senior Hagen Weintraub combined for a 36-hole 601 to finish fifth in the 11-team field.

Hirano bettered her first-round score by eight strokes Tuesday, firing a 71 to finish tied for 21st followed by Ronderos whose two-round 151 (71-80) landed her into a tie for 24th.

Weintraub bounced back from a first-round 83 to finish tied for 49th with a final-round 76.

Also competing for the Hurricanes was freshman Marion Arqi who finished tied for 36th with a pair of 78’s.

The Hurricanes return to action in two weeks, traveling to Kiawah, S.C. for the Edwin Watts Collegiate Oct. 29-30.