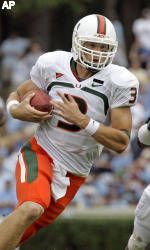 Brandon Tate scored on a long end-around in a spurt of 27 points to start the game and Connor Barth kicked four field goals to help North Carolina hold off Miami 33-27 on Saturday, giving Davis his first ACC win against a program he once built into a national champion.

Anthony Elzy ran for 95 yards and a score for the Tar Heels (2-4, 1-2 Atlantic Coast Conference), who turned in a dominating performance to take a 27-0 lead at halftime then hung on as the Hurricanes (4-2, 1-1) twice rallied to within a touchdown in the second half.

Davis had played down his first game against the Hurricanes earlier in the week and said after the game that beating Miami didn’t make the victory anymore special.

“Winning the game is the most important thing for this football team,” he said. “My total focus is on the University of North Carolina football team and I’m just proud of the way our kids performed.”

Finally finishing off an opponent made Davis’ day.

“You have to trust each other and believe in each other and respond in a way to overcome that adversity,” Davis said. “We knew we were going to get a shot from them, and these are the lessons as a young football team that you like to learn. You certainly like to learn them when you win a game as opposed to losing a game.”

The Tar Heels had struggled to do that this season, from a 34-31 loss on a final-play field goal at East Carolina to a 22-20 loss to Virginia and last week’s 17-10 loss at Virginia Tech. This time, they put together big plays when they needed them in the second half: a punt-forcing sack from Hilee Taylor to end a Miami drive near midfield late in the third quarter; a 49-yard catch-and-run from Tate on the ensuing possession; and two fourth-quarter field goals from Barth that kept Miami in catch-up mode.

“Basically, we showed that we can finish,” freshman defensive tackle Marvin Austin said.

Davis took over at Miami in 1995 and inherited a program hindered by NCAA sanctions that limited scholarships for his first three seasons. He gradually brought the Hurricanes back to the prominence they had enjoyed under Jimmy Johnson, going 51-20 over six seasons, while winning three Big East Conference titles and four bowl games.

His last team went 11-1 and finished ranked No. 2 nationally in 2000 after winning the Sugar Bowl. Then, after Davis left to coach the NFL’s Cleveland Browns, his former players went unbeaten in 2001 and won a national title under Larry Coker.

Davis’ new team got off to a fast start against Miami and Shannon, who was a player and an assistant under Davis.

But Miami did everything it could to get back in the game, with Darnell Jenkins scoring on a 97-yard touchdown catch that made it 27-20 late in the third quarter and Javarris James scoring on a short run to set up an onside kick with about a minute left. But the Hurricanes couldn’t overcome the halftime deficit or four interceptions from Kyle Wright – including one at North Carolina’s 3-yard line with about 6 minutes left and Miami trailing 33-20.

“We need to make sure that we are able to run the ball and protect the football and we didn’t protect the football,” Miami coach Randy Shannon said. “We talk about it and we keep talking about it, but it’s a process. I still do believe this is a good football team. Everybody may say, ‘Coach it’s not,’ but I believe in my heart.”

North Carolina played as close to perfect as it possibly could in the opening half. Elzy ran past and through Miami defenders. Barth, who kicked the winning field goal on the final play to upset fourth-ranked Miami here as a freshman in 2004, nailed a pair of kicks, including a 51-yarder. The Tar Heels’ special teams came up with a blocked punt that led to a touchdown, and Tate scored on a 54-yard run down the left sideline – thanks to Hakeem Nicks blocking two defenders – for the 27-0 lead with 9:59 left in the half.

“We just came in with confidence,” Elzy said. “We were so sure that we had their defense down to a T.”

The Tar Heels ultimately hung on by holding off several Miami spurts, including Jenkins’ long TD catch from Wright that was the second-longest in Miami history and the longest allowed by North Carolina in its history.

North Carolina finished with a season-high 183 yards rushing, with quarterback T.J. Yates adding a touchdown on a keeper in the second quarter. Yates threw for 218 yards.