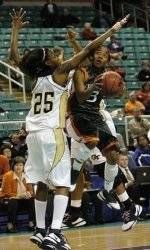 Miami Falls to Georgia Tech in First Round of ACC Tournament

Greensboro, N.C. – The University of Miami women’s basketball team closed a challenging 2006-07 season on Thursday evening, falling to Georgia Tech, 66-52, in the first round of the ACC Tournament at the Greensboro Coliseum.

Sixth-seeded Georgia Tech (20-10) converted 14 of 18 free throws in the game, while 11th-seeded Miami (11-19) connected on four of its five attempts. Senior Renee Taylor (Harlem, N.Y.), the ACC’s leader in both scoring and free throw percentage, did not make a trip to the charity stripe for just the second time this season and for the fourth time in her career.

Both teams shot well, hitting around 45 percent of its field goals, however the Yellow Jackets dominated the boards, out-rebounding the Hurricanes 34 to 20. In addition, Georgia Tech forced 13 first-half turnovers to take control of the game early.

Georgia Tech opened up scoring with a three-pointer and jumped out to the early 19-9 lead. Miami battled back with a 6-2 run – including a pair of Albrey Grimsley (Ft. Pierce, Fla.) baskets, and the Hurricanes outscored the Yellow Jackets 10-2 over a two-minute span to get within three points, trailing 28-25 with 3:16 remaining in the half. But Georgia Tech closed the half on a 9-1 run to extend its advantage to 11 points, taking the 37-26 lead into intermission.

The Yellow Jackets opened the second stanza with a six-point run to go up 43-26, but the Hurricanes responded with nine-straight points – including their first three-pointer of the game by junior Maurita Reid (Queens, N.Y.), to cut their deficit to single digits at 43-35. Georgia Tech came right back, using Chioma Nnamaka’s fourth three-pointer of the game to spark a 15-5 run, as the ‘Canes found themselves trailing by 18. Back-to-back threes from Reid and Taylor, followed by a Reid layup got Miami within 10, down 58-48, with 4:16 to go, but the Hurricanes wouldn’t get any closer, bowing out of the ACC Tournament with a 66-52 loss to the Yellow Jackets.

In her last game for the ‘Canes, Taylor finished with 14 points, four rebounds, a steal and an assist, while Reid and freshman Charmaine Clark (Hinesville, Ga.) added 12 points apiece.

“I have a team that has a ton of heart,” said second-year head coach Katie Meier. “I can’t be more proud of them. Renee has been everything to this team.

I think a lot was accomplished this season in terms of attitude, in terms of excellence, in terms of not accepting anything less. We had some tough losses on our roster, but you never saw us feeling sorry for ourselves.”

Four Yellow Jackets finished in double-figures, including double-doubles of 22 points and 10 rebounds from Janie Mitchell and 14 points and 10 boards from Stephanie Higgs.