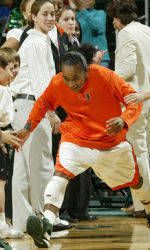 Taylor, the ACC’s leading scorer with 18.7 points per game, enters the regular-season finale nine points shy of becoming the 19th member of Miami’s 1000-point club in just her second season with the `Canes. The diminutive senior is expected to close her collegiate career as the program’s top free-throw shooter, converting more than 83 percent from the charity stripe, and will stand among UM’s top five in career and single-season three-pointers and free throws. Taylor comes off a 15-point, three-steal, three-assist performance at North Carolina.

Audibert is the only remaining Hurricane to have played in both the BIG EAST and ACC conferences and to have played in both the NCAA and WNIT Tournaments. A tireless worker that embodies the spirit of “the U”, she registered the steal and assist that led to Tamara’s James basket in becoming UM’s all-time leading scorer in 2006. She has started 20 games this season, including 10 in ACC play. In Sunday’s game at Carolina, she hit her third three-pointer of the season and of her career, and grabbed three rebounds.

A Look at N.C. State
The Wolfpack, receiving votes in both polls after defeating North Carolina last Friday, are playing inspired basketball since the return of 32nd year head coach Kay Yow, going 7-1 since then. N.C. State has won two straight entering Saturday’s regular-season finale, and are led by junior forward Khadijah Whittington’s double-double of 10.1 points and an ACC-best 10.3 rebounds per game. Three players finished in double-figures in Sunday’s 68-63 win over Virginia Tech, including double-doubles of 17 points and 13 boards from 6-7 senior center Gillian Goring and 17 points and 10 rebounds from Whittington.

The Series
Saturday marks the seventh meeting between Miami and N.C. State. The Hurricanes have not defeated the Wolfpack in six previous attempts, falling in Raleigh, 83-77, in their last meeting on January 26, 2006 — despite 29 points on 10-of-15 shooting, including five three-pointers, from Renee Taylor. This is just the third Saturday game for the `Canes this season, with UM going 2-0 in the previous two.