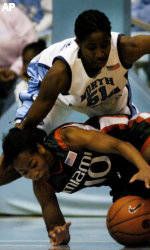 Strong Second Half Not Enough as Miami Falls to No. 2 North Carolina

Chapel Hill, N.C. – Despite a strong second half from the University of Miami women’s basketball team, second-ranked North Carolina won its 16th home game of the season, defeating the Hurricanes, 93-70, in ACC competition on Sunday afternoon at Carmichael Auditorium.

Miami was just the fourth team – joining Connecticut, Maryland and NC State – to score 70 or more points versus Carolina this season and just the second to do so at Carmichael.

Behind 23 second-half points from junior Maurita Reid (Queens, N.Y.), Miami bounced back from a lackluster first half to outscore No. 2 North Carolina, 46-41, on 53.1 percent shooting in the second stanza. Trailing 75-44 with 12:12 remaining in the game, a basket from sophomore LaToya Cunningham (Vallejo, Calif.) – in her second start of the season – sparked a 20-5 Hurricane run over the next 3:24. Reid hit back-to-back threes and Cunningham and senior Renee Taylor (Harlem, N.Y.) added a trey apiece over the run as Miami cut its deficit in half at 80-64 with just over seven minutes remaining.

But the Hurricanes wouldn’t get any closer, as Reid’s fourth foul forced her onto the bench for a few minutes, and the Tar Heels hit three three-pointers – including a pair from senior Ivory Latta – to secure the win.

Carolina jumped out to the 13-0 lead before Reid put Miami’s first points on the board three minutes into the game. Although the Hurricanes hit the glass hard in the first half, they managed to convert only 26.7 percent of their field goals and trailed by as many as 28 points, with the 52-24 margin at the half.

Reid tied her career high with a game-high 28 points – including five three-pointers – and also added nine rebounds, a game-high five steals and five assists. Cunningham added a career-high 16 points – including a career-high four treys, while Taylor finished with 15 points, three assists and three steals. The Hurricanes knocked down a season-high 11 threes in the effort, as Taylor and senior Amy Audibert (Niagara Falls, Ontario) added one three-pointer apiece to the combined nine by Reid and Cunningham.

Five Tar Heels finished in double-figures, including a team-high 21 points and six assists by Latta. Junior Erlana Larkins finished with a double-double of 13 points and 13 rebounds.

The University of Miami women’s basketball team plays host to N.C. State in its regular-season finale on Saturday, February 24, at the BankUnited Center at 3 p.m. The Hurricanes will honor their two seniors – Taylor and Audibert – in their last home game. Taylor enters the weekend just nine points shy of becoming UM’s 19th 1000-point scorer.