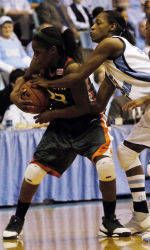 Hurricanes Lose at No. 2 North Carolina

CHAPEL HILL, N.C. (AP) – Ivory Latta scored 21 points and No. 2 North Carolina bounced back from a surprising upset by beating Miami 93-70 on Sunday.

Camille Little scored 13 points and Erlana Larkins added 13 points and 13 rebounds for the Tar Heels (26-2, 10-2 Atlantic Coast Conference), who were coming off a 72-65 loss to unranked North Carolina State on Friday.

North Carolina took out its frustrations on the Hurricanes (11-17, 2-11), shooting nearly 46 percent, never trailing and leading by as many as 35.

The Tar Heels overcame Maurita Reed’s 28 points by scoring the first 13 points of the game and remaining in control the rest of the way.

North Carolina shot 49 percent in the first half, held Miami to 27 percent shooting and took a 52-24 halftime lead on Alex Miller’s 3-pointer with one second left in the half.

LaToya Cunningham had 16 points and Renee Taylor added 15 for the Hurricanes, who lost their third straight game and have lost seven of eight.