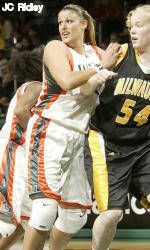 CORAL GABLES, Fla. – The University of Miami women’s basketball team will take on in-state rival Florida State on Thursday at the BankUnited Center in the second meeting between the teams this season.

The Hurricanes look to snap a two-game slide and even the season series with the Seminoles, after a 71-62 loss in Tallahassee less than a month ago. In that game, Miami was paced by senior Renee Taylor‘s 18 points, along with a strong 15-point contribution from junior Albrey Grimsley and a solid 10-point, nine-rebound performance by junior Carla Williams.

The Hurricanes return to the court after Sunday’s 79-69 home loss to Clemson – just their third defeat at the BankUnited Center this season. Taylor, the ACC’s leading scorer with 19.5 points per game, poured in a game-high 20 points in the loss, while freshman Charmaine Clark added her first collegiate double-double of 18 points and 11 rebounds – including an 8-of-9 performance from the charity stripe.

Clark, who has started six straight games, is developing as a strong inside presence for the Hurricanes and is averaging 15.3 points and 9.0 rebounds over the last three games – including a career-high 20-point performance in Miami’s win over Boston College.

A Look at Florida State
The Seminoles bounced back from their first ACC loss of the season, a 73-60 decision versus Duke on January 25, to defeat Virginia, 63-47, at home on Sunday. Senior Alicia Gladden scored a game-high 21 points in the win, while freshman Jacinta Monroe, the ACC Rookie of the Week, had a double-double of 15 points and 10 boards.

The Series
Thursday’s game will mark the 31st meeting between the in-state rivals with Florida State holding a 23-7 advantage in the all-time series. The Seminoles have won three straight over the Hurricanes.

Watch Live on CSS
Thursday’s game will be broadcast live on Comcast Sports Southeast. Play-by-play will be provided by Adam Levinson, while Robin Muller will add color commentary.