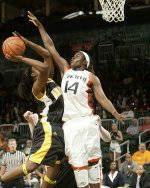 Coral Gables, Fla. – Renee Taylor finished with a game-high 26 points and Charmaine Clark added a career-high 20 points to lead the University of Miami women’s basketball team to an 83-68 win over Boston College at the BankUnited Center on Thursday evening.

It was the first ACC win of the season for a Hurricanes squad that opened the conference schedule with games versus the defending national champions and NCAA runner up. The victory snaps a five-game skid, as Miami evens its record to 10-10 on the season and improves to 1-4 in the ACC, while Boston College drops its fourth straight to fall to 10-8 overall and 0-4 in the league.

In a very physical game, the Hurricanes forced 19 turnovers – scoring 16 points off of them. Bouncing back from a disappointing shooting performance at Georgia Tech on Monday, Miami shot 51.7 percent from the field and 86.7 from the charity stripe (13-15) versus Boston College.

The Hurricanes used a balanced offensive attack, as four players scored in double figures and the team dished out 17 assists – their fourth-most on the season. They scored 30 points in the paint and added 24 from long range, as both Maurita Reid and Albrey Grimsley knocked down three three-pointers apiece. Taylor, the ACC’s leading scorer, returned to form and finished with 26 points, a game-high four steals and four assists, while Clark – a true freshman – had a career game with 20 points, five rebounds and a pair of blocks. Reid added 15 points and four assists to the winning effort, while Grimsley contributed 11 points and five boards.

Kathrin Ress had 26 points and eight rebounds for Boston College and Ayla Brown added 12 points and another eight boards.

Boston College came out strong in the second half and continued to hammer away at Miami’s lead, using a 9-2 run, including five Ress points, to cut the Hurricane lead to three, 50-47, with 12:59 to go. But Taylor responded with a three-point play and Reid added a layup to extend the Miami lead back to eight, 55-47.

The Eagles managed to get within four points, trailing 68-64, with 4:13 remaining in the contest. But a big three-pointer from senior Amy Audibert – the first of her career – sparked an 11-2 Miami run and the Hurricanes would cruise to their first ACC win of the season with an 83-68 victory over the visiting Eagles.

After a short hiatus, the University of Miami women’s basketball team returns to action at Virginia Tech (12-8, 2-3 ACC) on Thursday, January 25, at 7 p.m.