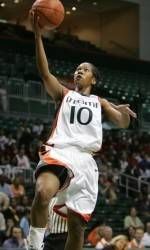 At 9-9 overall and 0-3 in the ACC, head coach Katie Meier and her Miami squad returns to the road in search of their first league win of 2007. After games versus both the defending national champions and NCAA runner-up in the span of a week, the Hurricanes look to regroup and snap their four-game slide.

Junior guard Maurita Reid comes off a 24-point performance versus No. 1/1 Maryland and is second on the team in scoring (13.7 ppg) and rebounding (6.3 rpg). She is tops on the team and second in the ACC with 3.2 steals per game, and also ranks among the league’s top 10 with 1.7 three-pointers per outing.

Junior guard Albrey Grimsley continues her hot streak, averaging 12.0 points over the last five games, and currently ranks third on the team with 8.5 points per game on the year.

A Look at Georgia Tech
Winner of two of its last three games, Georgia Tech comes off an 81-53 loss at No. 3/3 Duke. The Yellow Jackets are led by senior guard Stephanie Higgs (16.6 ppg) and junior guard Chioma Nnamaka (14.3 ppg, including an ACC-best 2.9 3pg). Tech is without leading rebounder Janie Mitchell (13.4 ppg, 6.7 rpg), who is recovering from a sprained MCL sustained in a game on Jan. 4.

The Series
Monday’s game will mark the ninth meeting between Miami and Georgia Tech, with Miami holding the 6-2 series lead. The Hurricanes have won three of their last four meetings with the Yellow Jackets, but dropped their last game, 79-62, in the first round of the 2006 ACC Tournament. Miami swept Georgia Tech during the 2006 regular season, including a 90-85 double-overtime victory at the BankUnited Center on Feb. 26, 2006.