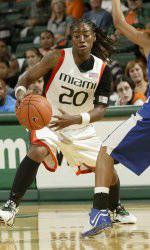 With an overall record of 9-8 on the year, head coach Katie Meier and the Hurricanes take to top-ranked Maryland looking to snap a three-game slide.

Miami has been nearly flawless at home this season, posting an overall record of 7-1 in games played in Coral Gables.

The Hurricanes rank third in the ACC in three pointers made per game (5.8) and sit at fifth in the league in steals per game (10.7).

Miami is led by senior guard Renee Taylor’s ACC-high 20.5 points per game. Taylor also ranks first in the league in free throw percentage (.883) and is fourth in the ACC in three pointers made per game (2.4).

Junior guard Maurita Reid ranks second on the team in scoring (13.1) and is second in the ACC in steals per game (3.2).

Playing some of the best basketball of her career, junior guard Albrey Grimsley is averaging 10.7 points over the last seven games and currently ranks third on the team with 8.2 points per game on the year.

A Look at Maryland

The defending National Champion Terrapins head to Coral Gables with a perfect 17-0 record coming off a 97-57 win over No. 18 Michigan State Saturday.

Maryland is led by a quartet of National Player of the Year candidates including junior center Crystal Langhorne, a Preseason All-ACC selection who leads the team in scoring (15.4) and rebounding (7.4).

Wednesday’s game will mark the seventh meeting between Miami and Maryland. Having won each of the last three games, including an 88-77 decision last season in College Park, Maryland holds a 5-1 advantage in the all-time series.

Wednesday’s game will be broadcast exclusively via streaming video on ACC Select at www.accselect.com. Hurricanes fans can purchase a SingleEventPass ($3.99 per event) or an AllEventPass ($5.99 per month) which allows unlimited access to games.