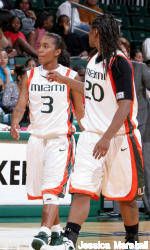 The <?xml:namespace prefix=”st1″ ns=”urn:schemas-microsoft-com:office:smarttags”?>University of Miami women’s basketball team will head to Tallahassee Sunday for a 2 p.m. match-up with in-state ACC rival FloridaState which will be televised live on Sun Sports<?xml:namespace prefix=”o” ns=”urn:schemas-microsoft-com:office:office”?>

The Hurricanes take to Tallahassee looking to improve on a 9-7 overall record after dropping a 72-42 decision at No. 3 Duke Wednesday in the 2006-07 ACC opener.

The Hurricanes are led by senior guard Renee Taylor’s ACC-high 20.7 points per game. Taylor, who ranks first in the league in free throw percentage (88.9) and fourth in three-pointers per game (2.3), has scored double figures in every game this season and is averaging 25.0 points over the last five games.

Head coach Sue Semrau and the Seminoles are off to a 12-3 start after a 72-53 win at BostonCollege Thursday night.

Miller leads the team with 6.1 rebounds per game.

Sunday’s game will mark the 30th meeting between the in-state rivals with FloridaState holding a 22-7 advantage in the all-time series.

Florida State won both meetings last season, downing the Hurricanes 79-54 in a Feb. 9 game at the BankUnitedCenter and taking a 68-61 decision in Tallahassee Feb. 17.