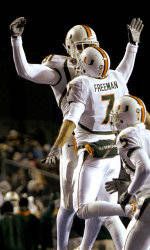 BOISE, Idaho (AP) – On a cold night, Larry Coker got the warmest possible sendoff from his Miami Hurricanes.

Kirby Freeman threw for 272 yards and two long touchdowns, ran for another score and the Hurricanes’ defense came through in the final moments to help Miami beat Nevada 21-20 in the MPC Computers Bowl on Sunday night, Coker’s final game at Miami.

Nevada had a first down at the Miami 36 in the final minute, but a diving interception by the Hurricanes’ Chavez Grant with 18 seconds left sealed the win and got Coker the perfect sendoff that his players wanted.

“I still love these players,” Coker said. “And I’m very happy for the win.”

Coker was fired Nov. 24 but agreed to stay for the bowl game – largely, he said, because the players wanted him there. He finished his six years with a 60-15 record and one national title, and by the time the team charter lands Monday in South Florida, defensive coordinator Randy Shannon will have officially taken over as Coker’s replacement.

Still, while battling temperatures in the upper 20s and wind that made it feel 10 degrees colder – Freeman shouted “I’m freezing” on the sideline at one point – the Hurricanes found a way to send Coker out a winner.

“Larry Coker and Randy Shannon are both gentlemen,” Miami athletic director Paul Dee said. “This wouldn’t have worked for us unless we were dealing with two fine people.”

Freeman threw a 78-yard touchdown pass to Sam Shields with 5:59 left in the third quarter to break what was a 14-14 tie and put the Hurricanes (7-6) ahead for good and ensure the program’s ninth straight winning season. Freeman also had a 52-yard scoring pass to Ryan Moore late in the first half.

Jeff Rowe threw a 27-yard touchdown pass to Marko Mitchell, and Brett Jaekle kicked four field goals for Nevada (8-5), including 44- and 40-yarders in the fourth quarter to get Nevada within a point. But the Wolf Pack got no closer, thanks largely to Grant’s heroics at the end.

“That last pass Jeff just threw a 10th of a second late,” Nevada coach Chris Ault said. “But it was a great game.”

“We had our chances,” Ault said. “That’s what is tough. We had our opportunities … and just didn’t make the right play at the right time.”

Shields caught four passes for 101 yards for Miami, while Moore made only two catches, but finished with 96 yards for the Hurricanes, who held a slim 300-297 edge in total offense.

But Freeman made a couple key mistakes later in the half, leading to a pair of Nevada scores.

Freeman was called for intentional grounding in the end zone with five seconds left in the opening quarter to give Nevada a safety, then threw an interception with 5:31 left in the half to set up Rowe’s scoring toss to Mitchell, one that put Miami behind 8-7.

Undeterred, though, Freeman stopped up and made a perfect throw to Moore for a score with 1:46 left in the half to put Miami ahead, and the Hurricanes wouldn’t trail again.

Down by seven entering the final quarter against the fifth-ranked defense in the country, Nevada nearly pulled off a comeback – and may have been denied a great scoring opportunity by a call that didn’t go its way.

Facing a third-and-10 from the Miami 28, Rowe dropped back to throw to Anthony Pudewell inside the Miami 10. Pudewell was hit by Kenny Phillips as he tried to catch the ball, which bounced in the air. Replays appeared to show that Pudewell trapped the ball between his knees before it hit the turf, but officials ruled it incomplete and the Wolf Pack eventually settled for a field goal.